Dear Readers: I realize that it has been a little while since we last connected. There’s a valid reason for that, I assure you: I’ve been hard at work on getting my latest manuscript ready to be published! I’m happy to say that I’m almost there, and that I will be posting clips from that memoir to this blog over the next few months. In the meantime, I’m posting a Foreward by my former editor that will be included in the memoir. This writing dives into the heart of my story, and posits questions to the reader that I hope you’ll find as engaging as I do. It can sometimes be very flattering to read what others think about you, which is certainly the case with this Foreward. I’m very grateful to Stephanie for her lovely piece of writing, and I think it will make a wonderful addition to my new book. Enjoy!

When I began working with Dr. Stephen Zuckerman in 1998 on his first book, it quickly became apparent that his ideas were multilayered, often built upon one another, even, at times, holographic in their dimensions. These were concepts that pummeled at comfortable paradigms to make way for new ways of thinking. Some were not really so new but rather were more complete, or more compassionate, or more far reaching. In this age of the almighty sound byte and TV’s 7-and-a-half-minute-attention-span, the very art of thinking is in jeopardy of becoming extinct. It is easier to think in clichés or stereotypes, especially with the information overload that we live in.

It is the mark of enduring idea when it continues to bear fruit even after many pluckings. Over the years of working with Dr. Zuckerman and his ideas, I am still discovering layers of meaning within his words and concepts that on first, second or even fiftieth glance had escaped me. Many of these ideas are disguised in such simplicity that it is easy to believe one caught the entire meaning right away. Yet again and again, surprising ah ha’s! have burst upon me from ideas that I thought I’d understood in total. The interconnection of one idea to another, or a larger meaning tucked into a goofy word-play or a concept that suddenly offers a new tool for dealing with some private torment of my own—these experiences have captured me as much as a reader as they have as his editor.

No idea of Zuckerman’s was more challenging than his experience of hearing G-d’s voice. Who, in their right mind, would believe such a thing? Certainly no one who values their credibility! Not other doctors, not psychiatrists, not upstanding businessmen in today’s techno-culture. Certainly, it succeeded in getting him incarcerated in his own Kesey-ian Cuckoo’s Nest. But it also proved to be a brilliant co-conspirator, taskmaster, conscience, mentor and spiritual guru. It succeeded in testing the medical legal system, the patience of his associates, and the odds at the racetrack. It outsmarted doctors, judges, and the DMS-4. It forced him to throw his professional and personal credibility to the dogs and literally got him a prognosis so hopeless that he spent 3 months in the kind of state institution where most inmates never leave. Even so, in taking so much from him, it did not leave him bankrupt.

When Zuckerman first described The Voice and the story of his encounter with G-d, I had a difficult time believing that he was fully sane. But over time, I found that there was nothing about him that supported those doubts. Nothing in his past history, his medical or familial history supported the diagnosis of psychosis. He’d lived a life that was relatively unscathed by misfortune—no physical or emotion abuse from childhood that pointed toward the pathological. Nor was he religiously fanatical—or religiously savvy, for that matter. He’d been raised by his parents as a secular Jew—typical of their generation—who attended synagogue once a year on Yom Kippur, held a Seder at Passover and the rest of the time worked long, hard hours to provide opportunities for their children. He’d never been traumatized like so many men of his generation who’d been drafted into the insanity of Vietnam. And although he was passionate about his work, he wasn’t drive to obsession, but rather led a balanced life most people would have envied for its sanity. He had no history of alcohol or drug abuse and he was physically fit and had been healthy his entire life.

His parents loved him and raised him in relative middle class comfort so he wasn’t tormented by the privation of poverty as so many Jewish families had been during and after World War II. His sense of humor and playful nature seemed to make his long hours as a doctor not only bearable, but thoroughly enjoyable. He had endless patience, was quick to forgive, slow to judge and nearly impossible to rouse to anger. Although he was brilliant, his wasn’t a tormented intelligence, as so many highly gifted people suffer from. In short, there was nothing that pointed to Stephen Zuckerman as a nutcase.

So, I believed him when he told me that he and G-d had conversed over a period of months just after he’d turned 50. His descriptions, both in conversations and in his writing, were always consistent, never indulgent or dramatic, and just quirky enough to be believable.

But when I decided to ‘believe’ his story, I found that I had to do so on more than just a personal level—I had to believe him on a professional level as well. I had to believe him as his editor, otherwise I would find myself either condescending to him as my client, or entirely unable to work with him. Naturally, the process of writing is an intensely interior one, and in order for an editor to be effective, he or she must enter that concentrated interior with the writer, as an observer, as a guide, as a muse and as a critic. Since the nature of the writing is to express what is seen through the eyes of the writer’s soul, the editor must perform all of these roles invisibly and unobtrusively. An editor must coax the writer’s ideas into maturity while being careful not to inject his own ideas into the process or the message of the writer. Often a writer is unaware at first of what he is trying to say—he is merely being pushed along by some deep compulsion to say it. Words themselves are alive and know exactly where they belong so the writer must discover his role as the vehicle of the message by getting out of the way while at the same time surrendering to the forces that are compelling the message. For this to happen, the writer has to disengage from his own ego, while, at the same time, he must so deeply believe in the idea that he will not give up through its arduous birth.

It is the role of the editor to walk beside the writer through this journey. Believing that Dr. Zuckerman had a three month conversation with God was more of a challenge to me personally than professionally. I had to suspend the part of me that was agnostic. I had to challenge the skeptic modernist in me while calling on the Catholic training of my childhood. I read everything I could find that might lead me to the key. I wrote in my own personal journal about it, and even went back to the church. I meditated on my own and secretly hoped that Zuckerman’s God would pay me a visit too. I spoke to mystics and found that things like visions and apparitions were more of a pain than a blessing and anyone with any sense would not wish for one. St. John of the Cross and St. Teresa of Avila had said the same thing, both being infinitely down-to-earth and pragmatic.

Ultimately, it was a matter of letting go of my blocks to believe and having the courage to simply listen to the message. Did it make sense? Did it sound real? Did it speak to me?

These are the questions that anyone who has picked up this book will have to answer for themselves. Some of what Zuckerman describes is supported in scripture, tradition and history and some will be debatable.

And so, Gentle Reader, in the end, it will be as it always has been—a matter of faith. 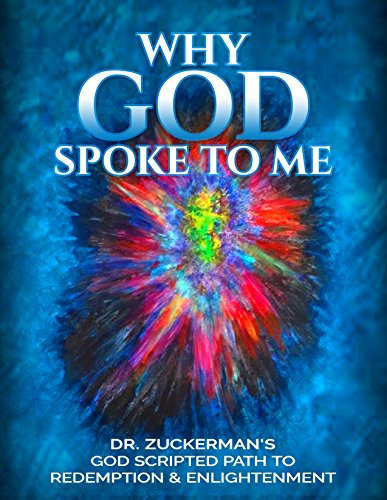